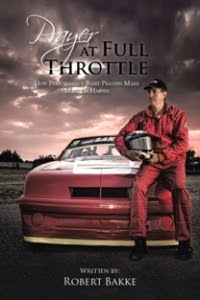 GOLDEN VALLEY, Minn., Sept. 8, 2014 /Christian Newswire/ -- When God was handing out the "overachiever" personality traits, evidently Robert Bakke was the first in line. God knew full well what and who He had created in Robert. So one day in 2011 in a lonely hotel room... God came calling, but Robert was in no mood to talk. The actual conversation went something like this: God: "Robert, I want you to write Me a book on prayer." Robert: "No, God, I'm not gonna do it!" God: "Excuse me?" Well, I think we all can imagine how that turned out. Yes, Robert wrote the book. It is titled Prayer at Full Throttle. Speaking of full throttle, the book "raced" to number 6 on Amazon's best seller chart and according to Robert, this wild ride isn't over yet... because for some reason, race car drivers have absolutely no interest in any numerical rating but that of number 1.

So how has this book exploded off the mark and headed to the top of the ratings? The book cuts straight to the point of why prayer works for some people and not so much for others, and then replaces doubt with miracles. The book's subtitle, "How Performance-Based Prayers Make Miracles Happen," is truthful and accurate. Robert even provides photographic evidence of actual miracles that have occurred as a result of performance-based prayer.


And there is absolutely nothing religious about this book! You won't read obscure theological theories or boring repetitive stories here. Take a look at some of these chapter titles: Thank the Lord for Taco Bell; Apparently, God Drives a Ford; and No Magic Fairy Dust. I can't wait to read it...uh, make that again!

ABOUT THE AUTHOR
Robert Bakke is a jet captain and aerobatic flight instructor, a black belt and regional champion, a best-selling author, a race car driver, and a ski instructor. He was running a multi-million dollar company by the age of 24. After shattering numerous sales records, Robert eventually said good-bye to his business career and moved on to captain jet aircraft and teach the "performance" of God's Word. Robert received his certificate of ordination as a minister of the Gospel on April 15, 2012.


Complimentary Media Copies available at pressreleases@authorhouse.com
Posted by The Byrd's Nest with Country Candles, Suds, and Naturals at 8:13 AM